Crazy, crazy week. I was at a busy and gluttonous work conference from Sunday through Wednesday which definitely threw me for a loop. I did the best I could but it was almost impossible to do my typical training sessions during the conference. Each day started with a quick workout, then 8am with a large breakfast, and continued with heavy meals, tons of meetings, drinks, big dinners, and late nights. Even when I got back to SF I was so exhausted and busy catching up on work & life that it was hard to squeeze in my swim/bike/run/strength sessions.

But it’s ok. I have to tell myself that taking a few days off to rest isn’t going to dramatically hurt my progress and I’ll get back on track in no time (which is what happened).

On Saturday I joined the weekly Golden Gate Tri Club bike ride that meets at the Bridge for a leisurely and fun Paradise Loop. I had done a tough 96 miles the weekend before so decided to do something a little less extreme this weekend. Plus most of us had to get back to Fort Mason by 1:00pm for our annual Triathlon Expo (more on that later).

We started out by heading up to the Marin Headlands and then making our way to Marin, re-grouping every so often to make sure nobody was dropped. A few people from the group went off to Mt. Tam which left 5 of us to finish Paradise Loop (a very popular cycling route). It was a warm and sunny day in San Francisco and luckily didn’t experience “June gloom” which is so common this time of year.

The ride was about 55 miles and I tacked on three Hawk Hill repeats just to get some extra climbing in. I have Death Ride coming up in 4 weeks (129 miles with 15,000 ft of elevation gain in Tahoe) so need to make sure I get my climbing legs ready!

Only one complaint of the day… I absolutely cannot stand biking over the Golden Gate bridge in the afternoon. There is way too much bike traffic with tourists and other cyclists and the congestion is very dangerous. In fact, on Saturday there was a guy on a stretcher who had just crashed into someone else. I really wish someone would regulate the traffic on the bridge — it’s not safe for anyone and even the tourists don’t get the best experience. There has to be a better solution. Anyone have any grand ideas?

Immediately following the bike ride we went straight to our annual triathlon expo at Fort Mason which showcases all of GGTC’s wonderful sponsors. We had cycling challenges, yoga classes, massages ’round the clock, running clinic, and tons of freebies. It was a blast! I was helping with the sign-in table and it was awesome talking with people interested in joining the club, training for their first triathlon, or improving their current training. And what a coincidence that there’s a vegetarian cafe called Greens right next door! So I had a nice veggie sandwich with a picked beet salad for lunch… yummmm. 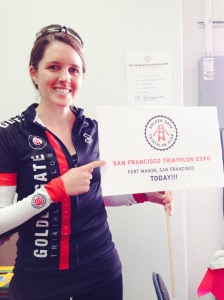 My Ironman coaches teamed up with GGTC’s Half Ironman training group for a joint Angel Island training day and it was so much fun!! I can’t believe I never thought to spend the day training over there. Angel Island is that huge land mass near Alcatraz; it’s a very historic state park and you can only get there by ferry.

The running is challenging, the scenery provides unique 360-degree views of the Bay, and the open water is very pleasant. I suppose you could bike around the island, too, but you would do the same 5-mile loop over and over again.

Claire, Tami, and I met at Fisherman’s Wharf to board the Blue & Gold ferry and the only thing on my mind was “I’m so happy I don’t have to jump off this boat and swim to shore!” What a concept!

We arrived, threw on our wetsuit, and did a quick 30 minute swim at Ayala Cove. Even though it was “only” 30 minutes, it still felt like a long time. I’m getting a little nervous at the thought of doing 2.4 miles during Ironman which will take me about 90 minutes. That’s a LONG time and I just have to build up to that and get ready. But at the moment it’s a little scary.

After the swim we did a quick transition and headed out on our run. We all did different distances based on our race calendar — I did 14 miles which was 3 loops around the perimeter of the island. The views were perfect — you could see every bridge, every SF building, every sailboat, Alcatraz, and even a rowing competition in the Bay. It was pretty surreal and definitely one of my favorite runs.

It was a little more hilly than I was expecting which slowed down my pace quite a bit, but I liked the challenge. I also liked that there are water fountains along the way so I could re-fill my bottle. For fuel I ate a package of Clif shot blocks and felt really strong the whole time.

After the run we had a little picnic on the beach (tofu and hummus wrap from Whole Foods) and hopped on the ferry to go home. Such a fun, sunny, challenging day! I definitely want to do that again!

As mentioned earlier, Sunday through Wednesday was a big work conference in LA. It was non-stop meals at restaurants, drinks, meetings, and videogame playing (tough life, huh?). But it was really hard to maintain my usual training schedule. I did wake up each morning and get a workout in, but I didn’t have a pool, spin class, or my normal equipment. So I did the best I could with what I had. I mostly stuck to treadmill intervals along with core work. It wasn’t the best but certainly better than nothing.

What was even harder, though, was trying to get back on schedule after the conference when I was home in SF. I was exhausted and there was absolutely no way I was going to get up at 5am for my swim or cycle class. I had too much to get caught up on, and just too tired. But again, it’s fine and I still worked out during the week, and now that it’s Monday I feel like I’m back on track. So it all worked out.

Because of my flight and busy travel schedule I didn’t have a chance to do a Week 23 summary last week. It was an awesome and challenging weekend so here’s a quick summary:

Friday — Started the weekend off right with a fast 8 mile run in the morning then a 2,500 yard pyramid swim under the sunshine in the afternoon. It was perfect.

Saturday — I did a 96 mile bike ride some some of the GGTC IMCDA group who had their last long ride before their big event. My goal was to join them for 80 out of their planned 120, but a few last-minute changes to our route led me to do 96, kind of by accident. It was really hard, I’m not going to lie. My glutes were aching, my neck got sore, and it was the closest to bonking as I think I’ve ever gotten. I didn’t have enough nutrition and just wasn’t expecting to go that long.

I’m glad I had this experience because I’m starting to realize how challenging it’s going to be to bike 112 miles (oh yeah and then run a marathon afterwards!). After the ride I was going to throw on my running shoes for a brick run, but I just couldn’t. I was way too exhausted and hungry. So note to self — eat more on the bike and stretch out regularly! Route: China Camp –> Lucas Valley Rd –> Pt Reyes Petaluma –> Chileno Valley –> Tomales Petaluma –> Hwy 1 –> Sir Francis Drake –> Nicasio Valley Rd –> Lucas Valley Rd –> China Camp

Sunday — I had a 2-hour trail run on the calendar so pinged my trail runner extraordinaire friend, Jenny, to see if she wanted to join me. I’m so happy she did! She planned out a route in gorgeous Mt. Tam (Ashley joined us as well) and I felt awesome. It was a little weird though, we started at 7am and it was already hot and humid. Very strange for June in the Bay. Then I quickly drove home, grabbed my suitcase, and was off to the airport for E3!

One thought on “Week 24: Angel Island, Tri Expo, and a Work Conference” 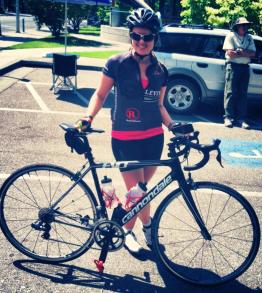 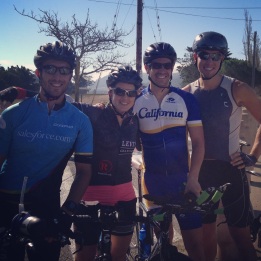 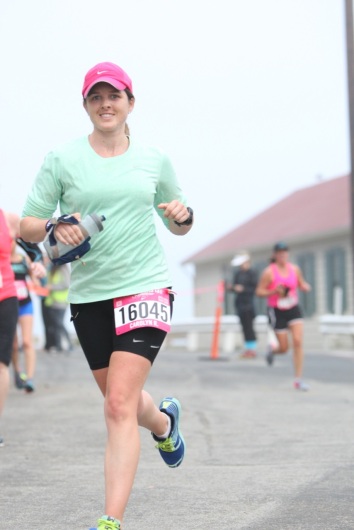 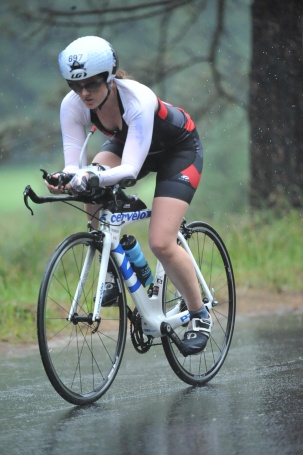 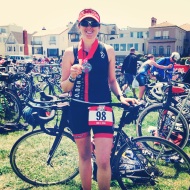 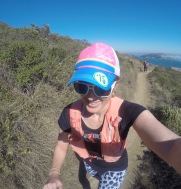 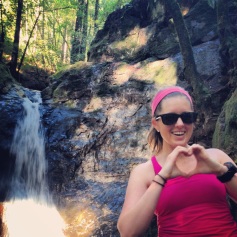 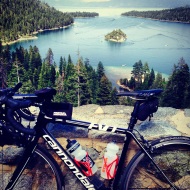 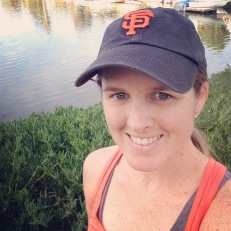 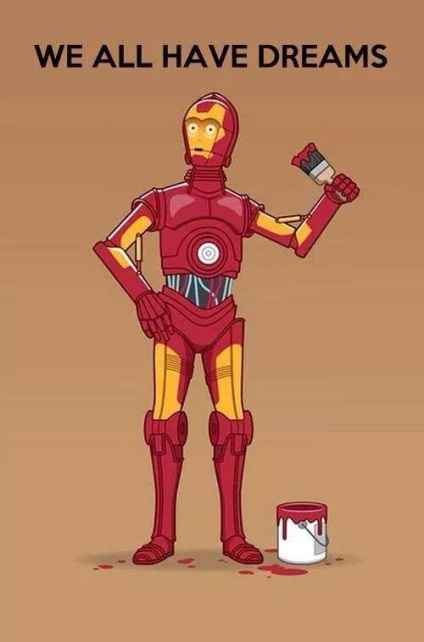 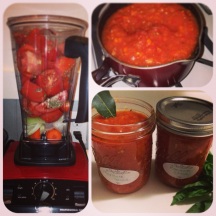 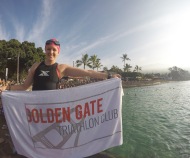 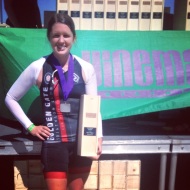 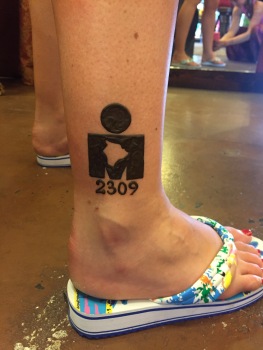 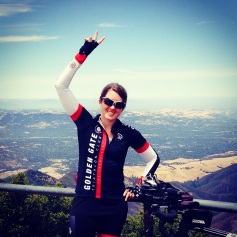 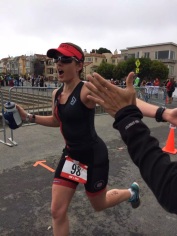 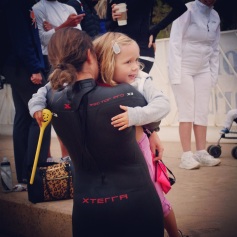 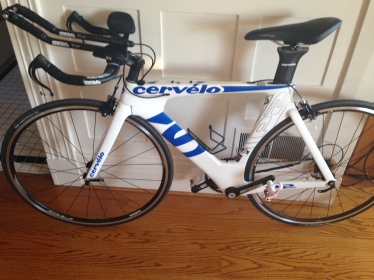 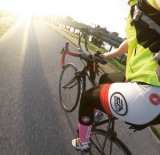 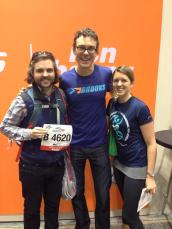 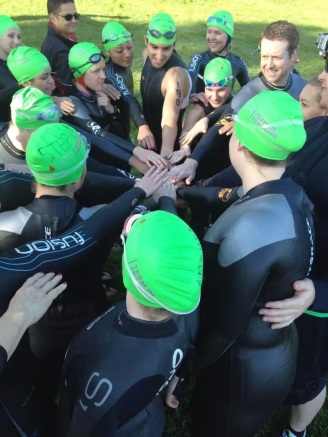 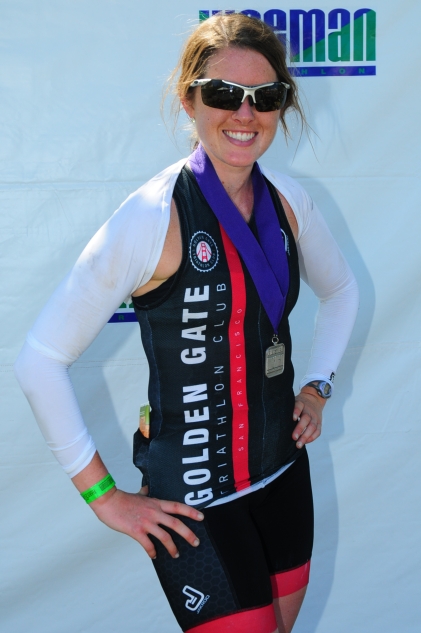 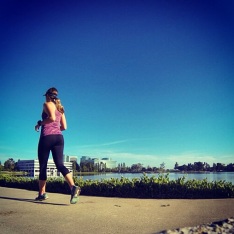 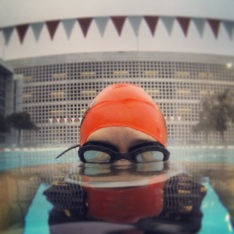 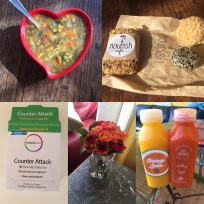 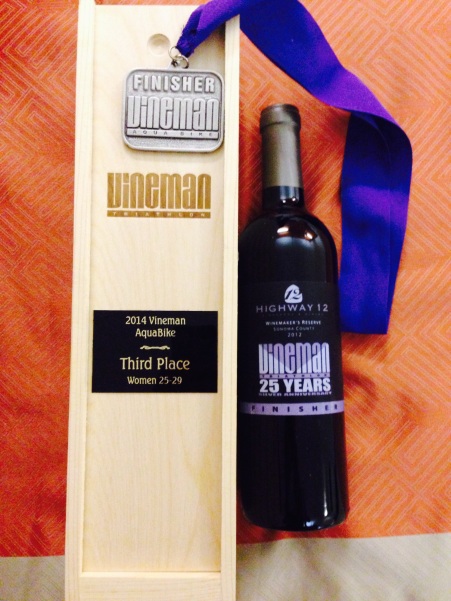 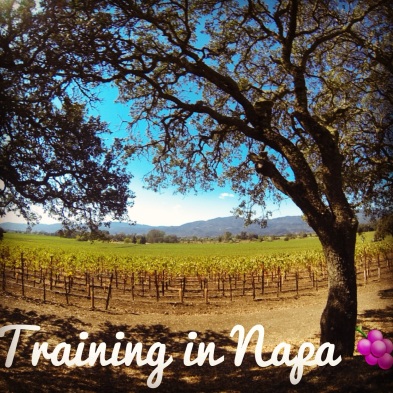 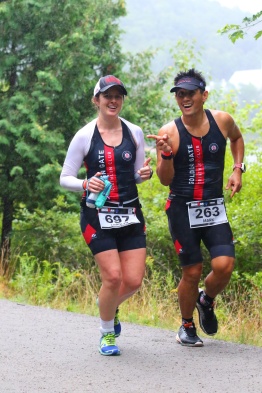